Apple WWDC app gets a dark theme and tvOS support

The WWDC 2016 keynote is scheduled for June 13 and we finally have an update to the annual WWDC app so as to keep a track of what all is in store irrespective of you attending or not attending the conference. 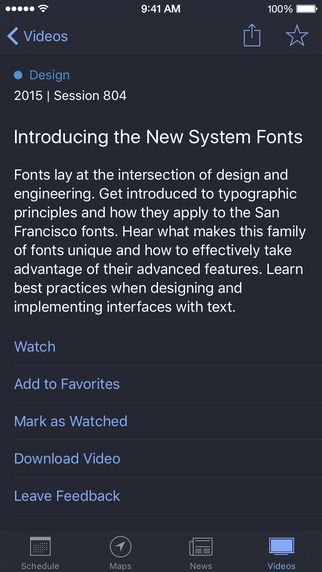 The new tvOS version of the WWDC app will allow the developers to virtually attend the sessions with the help of the new live streaming tools as well as carry out the other tasks with the PIP option on iPad. Apple has also changed the app to a darker theme which looks more so in line with the Apple Watch app. The schedule for the WWDC sessions is also announced with a few of them only understandable by the developers- “secrecy = swornTo()” and “wordsAlone(cannotDescribe:thisOne).”


Here’s what is new in the WWDC app latest update as stated on the App Store:

A tvOS version of this app is now available, so you can stream and download videos from WWDC 2016 and previous conferences on Apple TV. This update supports live streaming on iOS and tvOS. It also supports multitasking on iOS 9 on iPad.

iOS Police is all so enthusiastic about Apple products and all the accessories that come along to enhance them. iOS Police has got it all covered for you- iPhone, Mac, iPod, iPad and Apple Watch.